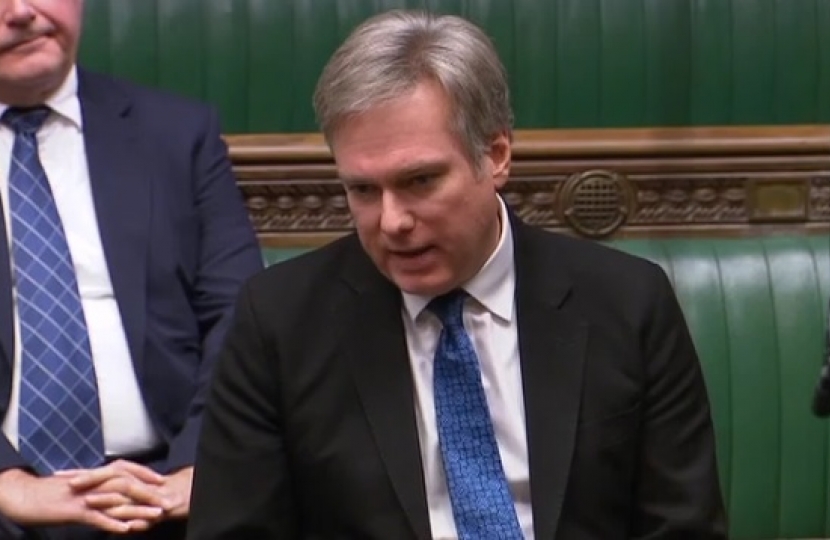 One of the hallmarks of levelling up has been the Towns Fund. Worth some £3.6 billion nationally, this initiative from Government seeks to open up the economic potential of communities such as our own.

This can only achieve the best results by collaborative working between central and local government.

It has recently been confirmed that seven Towns Fund projects in Crawley, worth £12.6 million, have been approved by the Government.

This will provide an important boost to the Crawley economy as we continue to recover from Covid-19’s impact. This welcome news follows Government giving the Crawley Town Deal Board agreement to go on and develop fully 10 project business cases in detail.

The aim of the Towns Fund is to secure regeneration of towns and delivery of long-term economic and productivity growth. Towns are also encouraged to show in practical terms how levelling up and reaching net zero carbon emissions are not mutually exclusive.

Further support for Manor Royal will see additional micro-parks created as part of the business environment improvement programme. Through some £1.5 million of Towns Fund support, plans also include a walking trail between each of them.

Transport links will be boosted with £2 million for the Crawley Bus Station and Station Gateway programmes, alongside £5.4 million from the Crawley Growth Programme; part of wider plans to maximise capacity at the bus station.

Development of a Town Centre Cultural Quarter will see £450,000 towards this initiative. Pop-up displays and test events will be held to try out new town centre venues and spaces, helping to lead to enhanced business growth and town centre footfall.

Plans for the Commercial Eastern Gateway will see £150,000 of funding for a feasibility study for further phases of commercial space in this area.

In Parliament during 2023 and beyond I will continue to back projects that support Crawley.

Sussex will benefit from a trial of new innovative solutions to free up hospital beds.

Sussex is one of six areas exploring new ideas to free up hospital beds and make sure patients get the right care at the right time – key to reducing future urgent and emergency care delays and help getting ambulances back on the roads quicker.

With the Government and the Sussex Health & Care ICS working together local patients will benefit from this initiative.

It is vital that people are able to leave hospital as soon as possible – not just to make space for those who need urgent care but it is best for patients as well.

I am grateful to all working locally on this initiative. Ensuring people can be seen quicker in our NHS is a key priority and one I continue to pursue with the Health & Social Care Secretary.

I have received confirmation from the Department of Health & Social Care that Langley Green Hospital in Crawley will see improvements to mental health crisis services worth more than £1 million.

As part of a package of measures to enhance mental health facilities across Sussex, Langley Green Hospital will receive an improved mental health crisis de-escalation suite, with investment from Government.

It is right that people experiencing mental health crisis get the care and support they need and I welcome investment from Government into facilities at Langley Green Hospital.

I have been clear about the importance of treating mental health on a par with physical health and this is a welcome boost for services in Crawley.

The Government is committed to investing at least £2.3 billion of additional funding each year by 2023-24 to expand and transform mental health services, meaning that millions more people are able to get the support that they need.

I am grateful for staff at Langley Green Hospital who help people requiring mental health support every day. I have been liaising with the Health & Social Care Secretary about the details on Government support for this project.

Last week I steered my Hunting Trophies (Import Prohibition) Bill through its committee stage in Parliament. My Bill would ban British hunters from bringing body part ‘trophies’ of endangered and vulnerable animals into Great Britain.

To see such widespread parliamentary support for my Bill to ban trophy hunting imports is extremely heartening. I know that protection of animals is an important cause for many of us in Crawley and I am grateful to the Government for supporting this legislation.

The Bill will now return to the House of Commons on a date to be confirmed. It is important that we stand up for global conservation and tackle activities which put this at risk.

While we cannot end their pursuit, we can prevent British hunters from taking part in this activity and bringing their ‘trophies’ home.

Let Parliament tell the world that we know it is wrong to kill endangered animals for entertainment.

My late colleague, Sir David Amess, campaigned on this issue tirelessly. His dedication to this cause is very much in my mind.

Ban on domestic advertising and sale of cruel animal activities

This month I secured and led a House of Commons Adjournment Debate calling for a ban on the advertising and sale at home of cruel animal activity experiences abroad.

I am frequently inundated by messages from people in Crawley who are always looking for different ways which we can enhance protections for animals. With this being a cause close to my own heart I was pleased to lead this House of Commons debate highlighting the scale of animal experiences abroad, which many people simply do not know are available as a result of cruelty towards some majestic creatures.

Hundreds of thousands of wild animals each year are exploited for entertainment in the global tourism industry. Activities such as tiger cubs being made to pose for selfies, elephant rides and captive dolphin shows may appear benign, but actually rely on cruel treatment that harms the welfare of the animals.

Taking action to address perilous and illegal English Channel small boat crossings: In the interests of those undertaking these dangerous journeys, as well as that of hard-working British taxpayers.

Last month, four souls were lost in the English Channel when a boat carrying more than 40 people started sinking. Such a situation is not only a tragic loss of life, but an important reminder that further action needs to be taken to prevent people from attempting such journeys in the first place.

This is an issue I have continued to pursue in the House of Commons as well as in one-on-one meetings with the Home Secretary.

I have been working with parliamentary colleagues to secure vital changes in law to tackle the people smugglers and criminal gangs behind the English Channel small boats crisis.

It is little wonder that there are so many people making the crossings if the people smugglers can brazenly post on social media in this way. I welcome the Government agreeing to amendments I am supporting to include illegal immigration and modern slavery as priority offences and this firm action to tackle online activity by the people smugglers. Tackling the TikTok traffickers will make a real difference.

I am supporting an amendment to the Online Safety Bill led by Dover MP Natalie Elphicke: Government has now agreed to add illegal immigration and modern slavery offences to the list of priority offences covered under the Bill. Posting videos that portray this activity in a positive light would therefore be a priority crime and platforms would have to proactively remove it.

Since taking office the Prime Minister has been right to treat this issue as a priority: delivering the largest ever small boats deal with France which increases patrols by 40 per cent, and re-establishing the Calais Group of Northern European nations to disrupt traffickers.

Before Christmas the Government set out a five-point plan of action.

Firstly; a new agreement with Albania. Around a third of people arriving in small boats last year were from the safe and prosperous nation of Albania. Countries such as France, Belgium, Germany and Sweden reject almost all Albanian asylum claims, however the UK’s rejection rate is less than half. The Prime Minister of Albania himself has said there is no reason why the UK cannot return Albanian asylum seekers immediately.

Secondly; a new, unified Small Boats Operational Command. This joined-up approach will have 700 permanent staff to bring together military and civilian capabilities to intercept more boats in the English Channel.

Thirdly; more than 200 staff and funding doubled to the National Crime Agency to tackle organised criminal gangs. This will assist in freeing up immigration officers to go back to enforcements. Data sharing with banks and other financial institutions will restart.

Fourthly; cheaper accommodation sites. I have continued to question the use of hotels in Crawley to house migrants. The financial cost of this is unfair and unsustainable.

Fifthly; asylum claims need to be processed in days or weeks, not months or years. The number of asylum caseworkers will be doubled and the casework process simplified.

Reform is needed to enhance the safety and security of all.

At the event myself and almost 100 other parliamentarians, including the Prime Minister’s Special Envoy for Freedom of Religion or Belief, heard powerful testimony from persecuted Christians around the world including from North Korea, India and East Africa.

In Parliament the day after this year’s launch, the Leader of the House of Commons reinforced the Government’s commitment to the freedom of religion or belief.

As Crawley MP and a member of the UK Parliament Foreign Affairs Committee I will continue to stand up for the freedom of faith.

Keeping Britain flying while tackling climate change: If we are going to reach net zero and safeguard the future of the industry, we need to quickly reduce aviation emissions and reverse the trend. We should not embark on this mission by restricting flying, however. Some propose creating new taxes aimed at reducing demand for business trips or family holidays. This approach would damage the economy, weaken trade links, and undermine cultural understanding.

With technology and innovation, we can keep Britain flying while reducing our contribution to carbon emissions. Sustainable aviation fuels (SAF) can cut a flight’s emissions by around 70 per cent, and this year Virgin Atlantic will attempt the first-ever net zero emission transatlantic flight. If we can drive the development and deployment of cleaner fuels and planes rather than shut down the aviation sector, it is entirely possible that we will fly to net zero.

Holocaust Memorial Day: An important opportunity for people from Crawley to reflect on the darkest times of European history. Holocaust Memorial Day falls on 27th January every year, the anniversary of the liberation of the infamous former Nazi concentration and death camp, Auschwitz-Birkenau, in 1945. I pledge to remember the six million Jewish men, women and children who were murdered in the Holocaust.

Alcohol duty freeze: As the hospitality sector recovers from the pandemic and faces higher energy prices, it is right we stand by our pubs, distilleries and breweries. I welcome the announcement from Government that alcohol duty will be frozen for a further six months, as part of a larger commitment to radically simplify the tax system and slash red tape.

Animal testing: In a debate in Westminster Hall on commercial breeding for laboratories, I called for animal testing to be consigned to the history books.