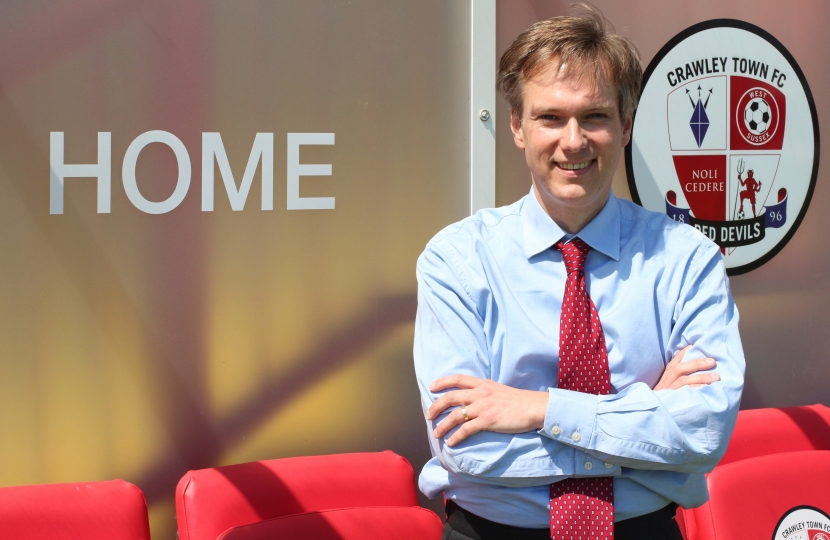 Speaking after the ceremony at the Checkatrade.com Stadium in Broadfield, Henry said;

“I’m grateful to the Crawley Town Community Foundation for inviting me back to present certificates to the second group of young people completing National Citizen Service in Crawley.

“It’s always a pleasure to see how the young people taking part in the scheme have progressed during the course of their time with the Community Foundation, and to hear from them directly about the skills they have developed.

“Earlier this month I was pleased to welcome the Leader of the House of Commons, Rt Hon Chris Grayling MP, to the Broadfield to introduce him to NCS participants and the Community Foundation’s dedicated staff. He was clearly impressed with what he saw, all the more deserving of praise considering the Foundation only began running NCS last year.

“Earlier in the year the Prime Minister confirmed that the Government will provide further funding to ensure that National Citizen Service covers 60 per cent of 16 year olds, as well as becoming the largest scheme of its kind in Europe.”

Social action projects are a key part of NCS, with participants on the Spring Programme raising £368.06 for Crawley Open House; a figure which will rise following a bucket collection at half-time during Crawley Town’s match at home to Carlisle United on 23rd April.

Henry also spoke in support of the Community Foundation’s third NCS programme, which will be held from 7th July to 26th August.

“I’d encourage all young people to visit www.ncsyes.co.uk and find out more about what National Citizen Service is all about.

“I’ll continue to play my part in ensuring schools and colleges are aware of the benefits that the scheme can offer to young people right across Crawley.”

“It was wonderful to see young people from Crawley graduate with such distinction and be rewarded by Henry for their efforts.

“The awareness and funds raised for the Crawley Open House as part of the NCS programme has been truly inspirational. We are now looking forward to the Summer Programme, where we have limited spaces for young people to sign up to.”