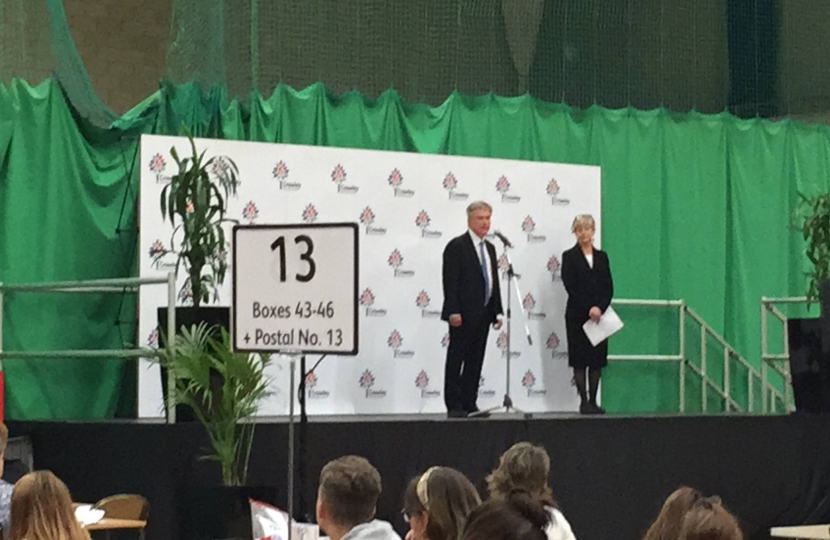 I was honoured and humbled to be re-elected as Member of Parliament for Crawley at the recent General Election.

I look forward to pursuing further the issues which were raised with me on the doorstep – these include continuing to increase employment, public services investment, funding for local schools and of course our exit from the European Union.

While I’m pleased to have received more than half the votes cast, I’m also conscious that many people didn’t put their cross next to my name on the ballot paper. I’ll strive to try and represent, to the best of my ability, all people in Crawley regardless of political preference.

In recent days we have seen tragedy and terror in our country once again, with the fire at Grenfell tower block in west London and the attack at Finsbury Park mosque resulting in yet more appalling loss of life in our capital.

Last Friday marked a year since the awful murder of MP Jo Cox, as she was on her way to provide assistance to her constituents in Batley & Spen. My thoughts and prayers have been with Jo’s family as we all remember. Her cross-party work on loneliness lives on and is a shining example of cross-party collaboration.

Working for Crawley since the General Election: There’s been lots to do since the results were declared and several local events to attend. I’ve also been replying to emails from residents – one of the main issues which has been raised with me since the election result is ensuring the UK secures the best possible deal from Britain leaving the EU.

The Conservative Party fought a sub-standard campaign nationally to the frustration of me and many others locally. Part of my task is to directly convey to the Government what needs to change and in that Crawley’s interests will be front and centre.

Letter to the Editors: Wrote to the Argus, Crawley News 24 and Crawley Observer to thank our town for re-electing me and offering my continued assistance.

Freedom of faith: Over the last week I’ve been back at work in Westminster and am grateful for the correspondence I have received from Crawley residents on the subject of the freedom of faith; including the work undertaken by the charity Open Doors in parts of the world where the right to worship freely does not exist.

In particular, Open Doors work to support Christians who have been liberated from the horrors of living under Daesh control.

On the day we went to the polls, the UK Ambassador to the UN spoke to his counterparts from across the globe to reaffirm our country’s leading role in the Global Coalition Against Daesh.

British efforts are showing results; Daesh have lost more than two thirds of the ground they previously occupied in Iraq, and almost half of that held in Syria. More than 2.5 million people have now been freed from their rule.

Working together: There is far more to serving as an MP than the boisterous excerpts of Prime Minister’s Questions each week. While it’s important for our head of government to be held to account in this way, other parliamentary work takes place in a far quieter environment – not just in the House of Commons chamber, but in a plethora of committee rooms and offices throughout the parliamentary estate.

Last year I set up and was elected to chair the All-Party Parliamentary Group on Blood Cancer. It's a role which includes working with blood cancer charities, and liaising with medical professionals, Government ministers, patients and their support groups.

Membership of the group in the previous parliament included Conservative, Labour and Democratic Unionist Party MPs.

I look forward to working alongside a range of parliamentary colleagues in the Commons and Lords, with the interests of blood cancer patients and their families – particularly those from Crawley – in mind.

Please be assured of my continuing attention.

If I may be able to assist, please do not hesitate to contact me, either by writing to me at: the House of Commons, London, SW1A 0AA, calling: 01293 934554 or by emailing directly: henry.smith.mp@parliament.uk