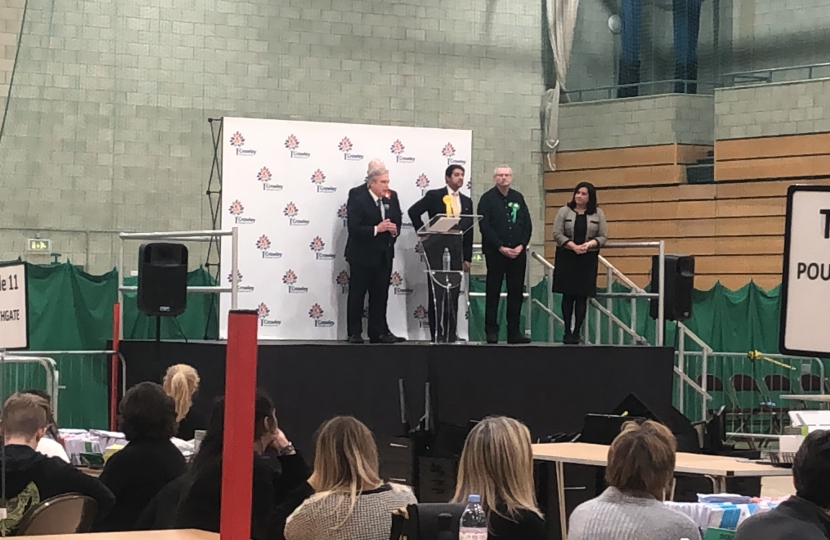 Henry Smith has been re-elected as Member of Parliament for Crawley; becoming the first person to win a fourth term since the creation of the parliamentary constituency in 1983, more than trebling his majority to 8,360.

At the General Election on 12th December, Henry received 27,040 votes, a share of 54.2%; both figures represent an increase on Henry’s result at the 2017 General Election. Voter turnout was 68%.

“There is no higher honour which the people of Crawley can offer than to serve as Member of Parliament. I am truly honoured and humbled to be asked to serve for a fourth term as our town's representative in the House of Commons.

“I’m immensely grateful to my team, and to all who supported our campaign – including everyone who delivered leaflets and knocked on doors in all weathers!

“As I’ve done for the last nine and a half years I’ll continue to put the interests of Crawley and our United Kingdom first in the House of Commons. The issues raised by local residents with me on the campaign trail – support for our schools, more funding for our NHS, and, yes, getting Brexit done – will be just a few of the causes I'll continue to pursue.

“For the fourth time in four years, the people have spoken in favour of the UK leaving the European Union. Our town and the whole country have given the Prime Minister, Boris Johnson, a further mandate to deliver the people's Brexit.”

The result was declared at 4.17am on Friday 13th December at K2 Leisure Centre by the Acting Returning Officer, Natalie Brahma-Pearl.

“While I’m delighted to have received more than half the votes cast in Crawley, and to have increased my majority, as the local Member of Parliament my role is to represent all in our town. I reiterate my commitment to do so, and to seek to assist local residents regardless of their political affiliation.

“I’ve been on the losing side of parliamentary elections in Crawley in the past; my commiserations and thanks to my three opponents during this campaign.

“My appreciation as well to the Acting Returning Officer and Crawley Borough Council staff who worked tirelessly through day and night to ensure the smooth running of the democratic process, and to the police who ensured everyone's safety.

“Next week I’ll be back in Westminster – to get Brexit done and to deliver on Crawley’s priorities.”