The life and career of Dame Caroline Haslett 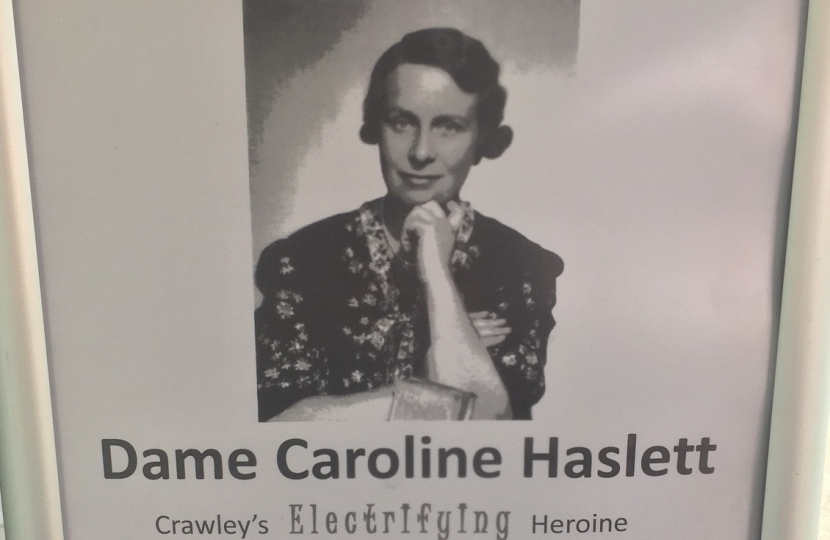 This has been a year of milestone anniversaries. Of course, 2022 marks the Platinum Jubilee of HM the Queen, and three quarters of a century ago this year Crawley was officially declared a new town.

What is somewhat lesser known is that there is a significant Crawley connection to a little-known wartime committee, whose report led to a decision in 1947 which we all take for granted to this very day. This link is represented by one woman whose name will be familiar to many in our community: Dame Caroline Haslett, who was born and grew up in Three Bridges.

The work of the Government’s Building for a Better Future committee led to the adoption of a British Standard for electrical installation and components in 1947. This included the three square-pin plug and shuttered safety socket which we use every day of our lives in this country and around the Commonwealth.

Caroline was undoubtedly a trailblazer. In addition to being an electrical engineer she joined the suffragettes in 1913 and campaigned for equality for women. It is a point of local pride that she was the only woman to sit on the committee.

Such an accolade of course did not happen overnight. During the First World War, Caroline worked at the Cochran Boiler Company, even being kept on in an environment where there was pressure for men returning from the war to replace the women who had filled the important jobs in manufacturing.

She became the first secretary of the Women’s Engineering Society after the war and named its President in 1941. Caroline also founded the Electrical Association for Women in 1924, becoming its Director.

Caroline’s work achieved national attention, even being featured in a Daily Express piece in the 1930s entitled ‘When They Talk, Men Listen’.

In a letter requesting her consideration, it was said that ‘the work involved in Membership of the Corporation particularly in the early years is likely to be extremely heavy and will make considerable demands upon your time.’ In this role Caroline helped to plan the Crawley we recognise today.

Work to highlight Caroline’s achievements continues, including a 2018 exhibition at Crawley Library organised by the Three Bridges Forum and the Caroline Haslett Memorial Project.

Caroline was also made a Dame of the British Empire in 1947. Dame Caroline passed away in 1957, after a life and career which made a significant impact in the field of electrical engineering, equality for women, and our local community in Crawley.