Calling for enhanced support for people living with diabetes 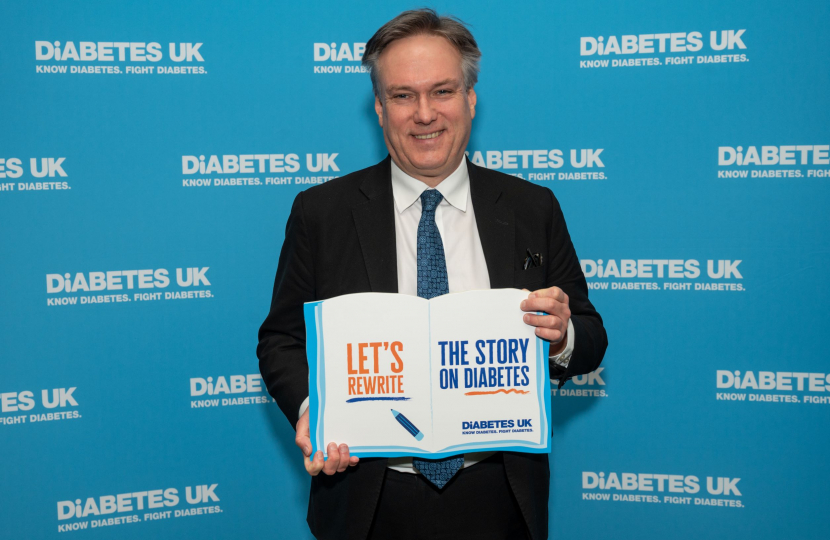 World Diabetes Day took place on 14th November: an important opportunity to raise awareness of this condition and reiterate the call for enhanced support for people living with it on a day-to-day basis.

I am grateful to Diabetes UK for coming to Parliament last month to meet with MPs to discuss their work to restore and improve diabetes care.

There are, of course, different types of diabetes. Around 8 per cent of people who have diabetes have type 1, where they cannot produce insulin. The most common type of diabetes in children and young adults, common symptoms are the four Ts: using the Toilet a lot, feeling very Thirsty, being more Tired than usual and losing weight or looking Thinner.

Type 1 is treated by daily insulin doses, either by injection or an insulin pump.

People with type 2 diabetes comprise around 90 per cent of those with the condition. This is when the body does not produce enough insulin, or insulin produced does not work properly (insulin resistance).

Diabetes UK state that the strongest risk factor for type 2 is being overweight or having a large waist. Risk is also increased if a family member has had the condition, or if you are from an African-Caribbean, black African, Chinese or South Asian background.

Some two per cent of people have other types of diabetes, including 11 different forms of monogenic diabetes, cystic fibrosis-related diabetes and diabetes caused by rare syndromes.

Research conducted earlier in the year by the charity found that thousands of people with diabetes are still struggling to access vital care.

Many people living with diabetes are still in need of care, in spite of the tireless efforts of the NHS. Without it, people can be at risk of serious complications, which can lead to premature death.

It was insightful to listen to people who live with diabetes and to hear from Diabetes UK campaigners. I am following up with the Health & Social Care Secretary to highlight with him some of the issues which were raised.

Last week I also met with Novo Nordisk, whose UK base is in Crawley, at an event to mark 100 years since the first use of insulin to support a patient with diabetes, following its initial discovery in 1921.