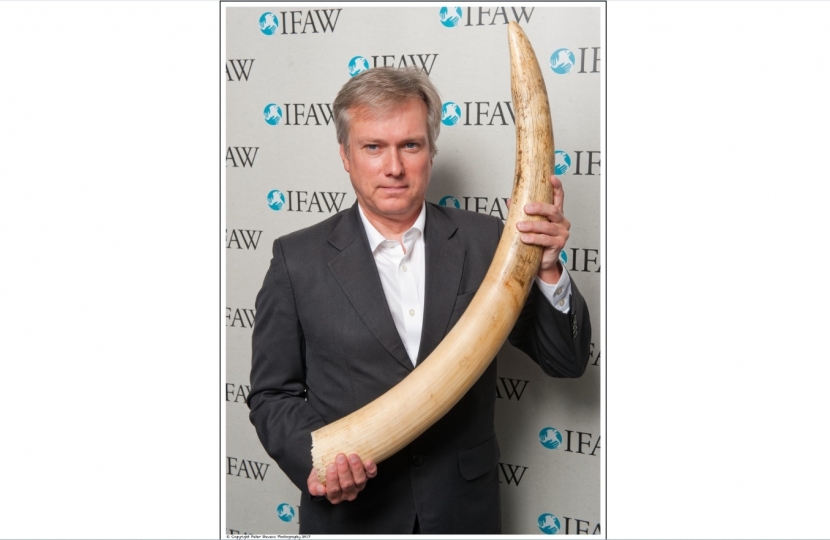 Crawley MP Henry Smith has given his support to a new ivory surrender launched by the International Fund for Animal Welfare (IFAW) to help protect elephants from further slaughter for the illegal ivory trade.

Members of the public are being invited to surrender their own ivory which will be destroyed as part of a campaign to close the UK’s ivory market and save this iconic species from the threat of extinction.

“With elephant populations at an all-time low and the species facing extinction due to the ivory poaching crisis which is killing at least 20,000 elephants each year, I believe it important to support IFAW’s initiative which enables members of the public to make a real difference for elephants and their future survival.

“I’ve been contacted by a number of Crawley residents on this issue and I’d encourage anyone in our town with such products to support IFAW’s ivory surrender which will help ensure that ivory is only valued on a live, wild elephant, where it belongs.”

IFAW, which has run previous successful public ivory surrenders in the UK, believes it is vital now more than ever before that the British public stand up for elephants by helping to end consumer demand for ivory products and keep up the pressure for a domestic ban on the ivory trade.

New polling released by IFAW reveals that the vast majority of the UK public want to protect elephants with a UK trade ban and do not wish to purchase ivory themselves. An overwhelming 95 per cent of respondents polled by YouGov stated that they would not be interested in purchasing antique ivory.

The legal ivory trade often provides a smokescreen for more illegal killing of elephants and by donating unwanted ivory, IFAW believes members of the public can make a positive contribution to elephant protection. A small number of ivory items will be retained for education and publicity purposes while other donations will be immediately transferred to a secret and secure location and ultimately destroyed by the appropriate Government agency.

IFAW continues to call on the UK Government to ban ivory sales in the UK as a priority.

Anyone wishing to donate ivory items is asked to post them to: Campaigns Department, International Fund for Animal Welfare, 87-90 Albert Embankment, London, SE1 7UD. For queries or large items, email info-uk@ifaw.org or call 020 7587 6700.

“We are very grateful for Henry Smith MP’s support for our campaign. Time really is running out for elephants and if we do not act now it will be too late. Historically ivory has been seen by many as a status symbol and something to value, but the reality is that a piece of ivory represents a dead elephant, cruelly shot or poisoned for its tusks.

“Many people in the UK have bought or inherited ivory tusks, carvings or trinkets over the years that they do not want now they understand that an elephant has died for this. We are encouraging people to surrender their unwanted ivory, whether legal or illegal, so we can ensure it is put beyond use, and so that it will not resurface on the market or help fuel further illegal poaching of elephants to satisfy consumer demand.

“We have recently seen strong moves from China and the US to tackle their own domestic ivory markets which is to be welcomed. As a nation of animal lovers in the UK, and with the UK playing such a significant role historically in the ivory trade, it is time for us to also take a stand by saying ivory belongs to elephants and no-one else. We can see there is strong political will in the UK to make this happen, and we need action to stop the ivory trade now.”