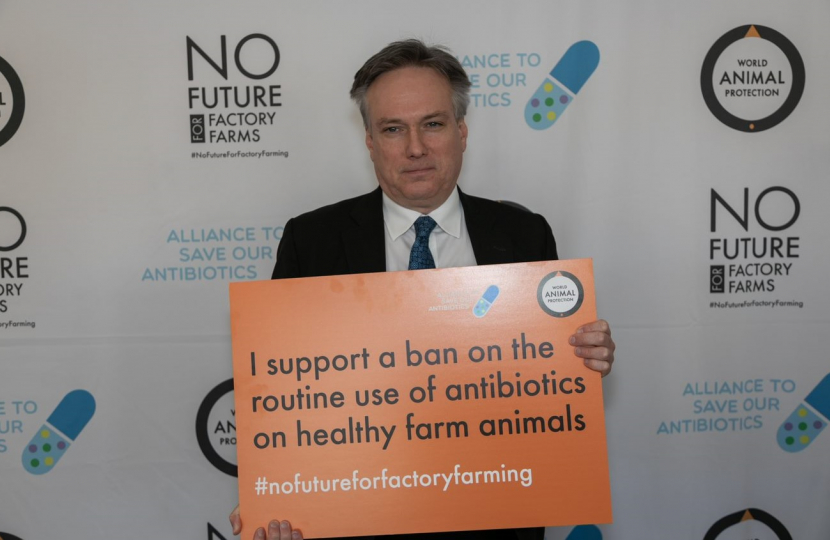 Henry Smith MP has joined World Animal Protection and the Alliance to Save Our Antibiotics at the parliamentary launch of the life-threatening superbugs report (on Wednesday, 23rd November).

The report reveals concerning new findings that antibiotic-resistant superbugs were found in rivers and waterways in areas with high levels of factory farming in Sussex, Norfolk and the Wye Valley.

“I’m pleased to support a ban on the routine preventative use of antibiotics on UK farms. The inhumane and abhorrent conditions farm animals are being kept in is a direct threat to the health of my constituents.

“If we continue to overuse antibiotics to compensate for cruel animal welfare standards found on factory farms, then the antimicrobial resistance that is produced as a result will become one of the biggest dangers to human health.

“This report makes the link between animal welfare on farms, the environment, and human health clear – we must improve welfare conditions in factory farms if we are to stop antibiotic resistance. That is why I am calling on Thérèse Coffey, Secretary of State at the Department for Environment, Food & Rural Affairs to bring in an immediate ban on the overuse of antibiotics on UK farms.”

Resistance was found in dangerous bacteria like E.coli and S.aureus to antibiotics including cefotaxime and vancomycin, both classified by the World Health Organisation as critically important in human medicine. Vancomycin is the antibiotic used to treat potentially deadly MRSA infections.

Around 80 per cent of all animals in the UK live on factory farms. These farms’ squalid, cruel and cramped conditions force the need for wide-scale preventative antibiotic use – without which those animals would not survive. Superbugs from factory farms reach people in many ways via our rivers, for example, in drinking water; swimming and recreational activities; or the consumption of fish from contaminated waters. Unless the Government takes action, the UK faces a human health crisis whereby disease can no longer be treated due to antibiotic resistance.

The UK farming industry has managed to reduce its antibiotic use by 55 per cent since 2014, but far greater reductions are still needed. Unfortunately, the UK Government has refused to ban preventative group treatments – as the EU has done – despite having previously promised to do so. The World Health Organisation estimates that 1.27 million people die globally each year as a direct result of antimicrobial resistance (AMR), and this will rise to 10 million by 2050 if action is not taken now. This would far outweigh the impact of Covid-19 and make minor infections and common surgeries potentially deadly.

Last week the Government launched a call for evidence on the antimicrobial resistance national action plan. It is imperative that a much-needed ban on the overuse of antibiotics in healthy herds will be introduced as a part of the action plan.

“Our report shows that our rivers are awash with superbugs. The World Health Organisation has estimated that antibiotic resistance will be the leading cause of death globally by 2050 with a total economic cost of £66 trillion – this is a human health crisis.

“We are calling on the UK Government to act now, to raise welfare standards, prevent suffering and ban routine preventative use of antibiotics on farm animals, as the EU has done. If the welfare of farm animals was improved, there would be no need for this dangerous and unnecessary use of antibiotics that is such a threat to human health.”

World Animal Protection is calling on the Government to stop the spread of factory farms and ban the routine use of antibiotics on herds of healthy animals. You can sign the petition here: www.worldanimalprotection.org.uk/factoryfarming