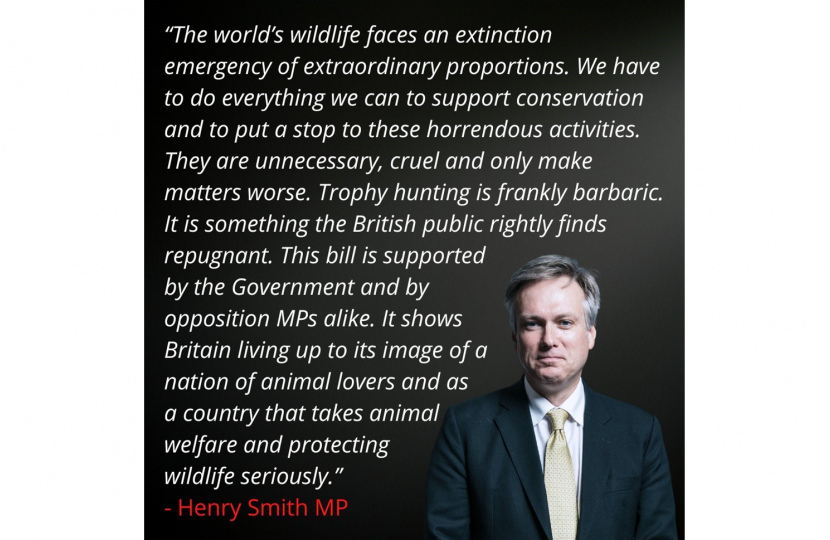 I regularly receive messages from people in Crawley in support of enhanced animal welfare measures. This is no surprise, of course, because we are very much a community and a nation of animal lovers.

Over the last decade we have seen progress in this area, including issues I have campaigned over and indeed led the charge on.

There are still causes where we must go further and legislation I have introduced will be coming back to Parliament this week.

This Friday, 25th November, I am leading a debate on my Hunting Trophies (Import Prohibition) Bill.

This piece of legislation would prohibit the importation of hunting trophies from endangered species into Great Britain; reducing the dreadful consequences which are being felt in the wilderness.

I am very much aware that at the last General Election, I and every other Conservative MP stood on a manifesto committing to ‘bring the ivory ban into force and extend it to cover other ivory-bearing species, and ban imports from trophy hunting of endangered animals.’

Since the 1980s, an estimated 25,000 animals which have been slaughtered have been brought into the UK; many of these are vulnerable or even endangered. The animals which have suffered as a result of this barbaric ‘sport’ include cheetahs, hippopotamuses, lions and polar bears, which are already under threat from the concerning impact of climate change.

Trophy hunting has been described as ‘cowardly plundering of our animal world’ by none other than Sir Ranulph Fiennes. Through a world-leading ban this country has an opportunity to make clear its opposition to such barbarism.

I am grateful to the increasing number of Crawley residents who are contacting me in support of this legislation, particularly those writing to me in such haste after finding out about it that they are asking me to support my own Bill! It is this enthusiasm which I hope Parliament can convey during the debate this week.

Legislative action taken in recent years to protect animals has included the introduction of animal sentience into UK law, as well as measures raising maximum sentences for animal cruelty ten-fold from six months to five years. After leading the campaign for CCTV to be made compulsory in slaughterhouses, I welcomed this becoming mandatory in England four years ago.

This week we can work further towards similar progress on the issue of trophy hunting.

As Sir David Attenborough once said, trophy hunting is ‘incomprehensible’. On Friday the House of Commons has an opportunity to agree.