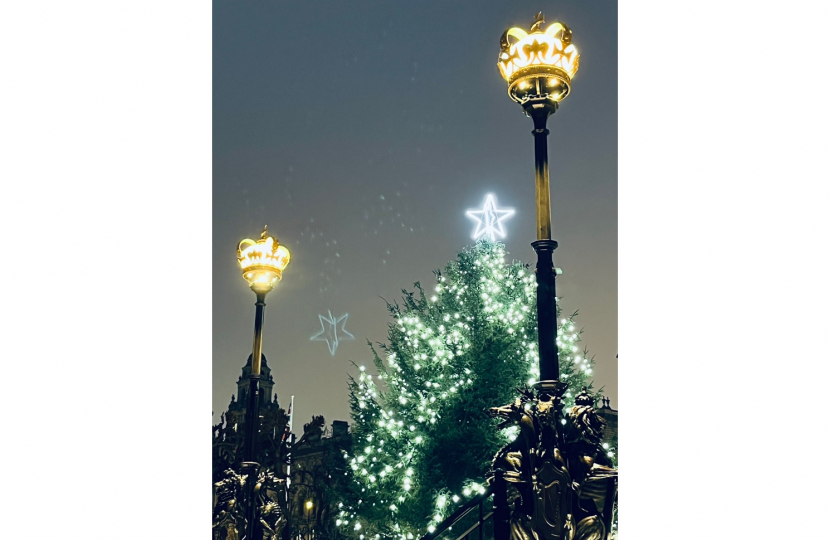 The Christmas period is often a time for reflection. For many of us, to think of 2022 will be to remember Her late Majesty, Queen Elizabeth II.

We can be thankful that, in June, Her Majesty was able to see the outpouring of love and affection for her, at the culmination of the Platinum Jubilee celebrations from the balcony at Buckingham Palace.

It was with great sadness that we heard the news in September that the Queen had passed away. I feel incredibly fortunate to have had the honour of meeting the Queen and the Duke of Edinburgh in Crawley in 2006, and it was some comfort to speak in the House of Commons about how many of us in Crawley felt about Her Majesty’s lifetime of duty and service.

The words of Her Majesty following the attacks in the United States on 11th September 2001, where she spoke about grief being the price we pay for love, are timeless.

As we look forward to the coronation of His Majesty King Charles III in May 2023, in recent weeks I attended the unveiling of a plaque in Westminster Hall by the King to commemorate the lying in state of the Queen.

At the start of the year we marked the 75th anniversary of the official designation of Crawley as a post-war New Town, on 9th January 1947. The neighbourhood principle which runs through our community is as strong as ever.

It is difficult to comprehend that it is approaching ten months since a sovereign country in Europe was invaded with the intention of toppling the government and installing a puppet regime. While Kyiv still stands as a symbol of a free democracy, the people of Ukraine remain under attack this Christmas. Crawley can be proud of the role it has played in welcoming Ukrainians.

Global factors including the Russia Putin regime’s invasion of Ukraine have had an effect around the world. The Government is providing £39 billion of support to people throughout our country to address cost of living pressures, which have affected every family. Details of this support from Government are available at: www.gov.uk/helpforhouseholds

This support for households is alongside backing for our public services. As the summer term came to an end, the Department for Education confirmed that funding for schools in Crawley is set to increase in 2023-24 to almost £100 million. Overall, core schools funding is going up by £1.5 billion in 2023-24, building on the £4 billion increase already provided this year.

At the last General Election I was elected on a manifesto to enhance backing for our police officers, and this is what I continue to pursue on a local and national level.

Sussex was awarded £1.5 million of new funding from the Safer Streets Fund this year; a £50 million package of Government support to provide extra CCTV and streetlighting, protect women and girls, and tackle neighbourhood crime.

In May of this year I took the decision to step down as Chair of the All-Party Parliamentary Group on Blood Cancer, which I established in 2016 and had led since its founding. The Group is in capable hands and I remain a Vice Chair, continuing to pursue issues affecting people living with blood cancer.

This includes the provision of Evusheld, which provides much-needed protection for the immunocompromised where vaccines, to guard against Covid-19 for example, are not as effective.

In September I launched my petition to highlight the strength of opposition in Crawley to Homes England proposals to build up to 10,000 housing units on green fields to the west of Ifield.

I continue to raise my objections in Parliament. It is clear these proposals would cause significant environmental damage and infrastructure pressure, without the people of Crawley being fully in control of the planning process.

Recently I met with the Sussex Wildlife Trust at Old House Warren to reiterate our opposition to plans put forward by Center Parcs for a holiday site there.

Throughout 2022 my Hunting Trophies (Import Prohibition) Bill has been progressing through Parliament. The Bill would ban British hunters from bringing ‘trophies’ of endangered and vulnerable animals into this country, and completed its Commons second reading last month. It will commence the next stage of its parliamentary journey in the new year and work on this remains ongoing.

This month, the Government approved Crawley as the location of a new Community Diagnostic Centre. This will see patients benefit from quicker access to treatment and lifesaving diagnostic tests close to home, and I am following up with the Health & Social Care Secretary about these plans.

These are just some of the issues I will continue to pursue in 2023.

Many people living with diabetes are still in need of care, in spite of the tireless efforts of the NHS. Without it, people can be at risk of serious complications, which can lead to premature death.

It was insightful to listen to people who live with diabetes and to hear from Diabetes UK campaigners. I am following up with the Health & Social Care Secretary to highlight with him some of the issues which were raised.

I have also met with Novo Nordisk, whose UK base is in Crawley, at an event to mark 100 years since the first use of insulin to support a patient with diabetes, following its initial discovery in 1921.

Hunting Trophies (Import Prohibition) Bill: Wrote for Parliament Politics Magazine about my Bill to ban British trophy hunters from bringing home the bodies of endangered animals they shoot abroad. This legislation is to have its Committee Stage next month and I am working on the continued progress of the Bill.

Boosting funding support for Crawley schools: Ensuring equality of opportunity for all our young people is essential and needs to be backed up with the funding to make it happen.

It is right that we are seeing greater investment in our schools, with an extra £2 billion over the next two years.

The extra support is going to deliver the highest real terms spending on schools in history by 2024-25.

Per pupil average funding for mainstream schools is going to increase, by approximately five per cent overall in 2023-24, compared to the current financial year. Local authorities will receive an additional £400 million to boost high needs budgets, to assist in supporting children with special educational needs or disabilities.

This backing will help our schools and colleges to save money on bills by putting in better heating controls, installing insulation to reduce heat loss from pipes, or switching to energy efficient lighting.

Of course, this initiative will not only help schools and colleges save money, but they will become more energy efficient and have enhanced winter resilience for the future.

A primary school will receive, on average, around £16,000, with approximately £42,000 for secondary schools. Further education college groups are to receive around £290,000.

This investment in young people will help them go on to achieve their full potential.

As we recover from Covid-19 one of the key healthcare issues I have continued to pursue is the need to address the backlog in cancer services. Action is being taken to achieve this and a new Community Diagnostic Centre in Crawley will be an important factor in enhancing cancer support locally. I am following up with the Health & Social Care Secretary about these plans.

Pension Credit: This month I have been supporting the Government’s campaign to boost the take up of Pension Credit. Some 1,700 pensioners in Crawley already claim Pension Credit, but there are many more who could be doing so.

NHS boost: A record number of doctors and nurses are now working in the NHS in England – with Government on track to deliver on its commitment for 50,000 more nurses by 2024.

The pandemic has resulted in a backlog of operations and procedures – but we must ensure that patients get the care they need.

Tackling the TikTok traffickers: Supporting an amendment to the Online Safety Bill which will create a new criminal offence of intentionally sharing a photograph or film that facilitates or promotes modern slavery or illegal immigration.

Illegal and dangerous English Channel small boat crossings must be stopped. Tackling the TikTok traffickers will make a real difference. It is no wonder there are so many people making the crossings if the people smugglers can brazenly post on social media in this way.

This is not simply about immigration and border security. The small boats crossings are dangerous and many people have been harmed or lost their lives making these hazardous journeys. The crossings are also connected with very serious crime here in the UK, including modern slavery, the drugs trade and trafficking.

Kept Animals Bill: I spoke in Westminster Hall in support of the Government’s Animal Welfare (Kept Animals) Bill, and I urged ministers to continue the work they have done in recent years to enhance animal protections.

China: Calling for the Security Minister to come back to Parliament and provide an update on the Government’s actions to tackle Chinese Communist Party ‘police stations’ in countries such as the UK.

Online Safety Bill: Proposed changes to the Online Safety Bill will offer users a ‘triple shield’ of protection when online: social media firms will be legally required to remove illegal content, take down material in breach of their own terms of service, and provide adults with greater choice over the content they see and engage with.

With my best wishes for Christmas and a Happy New Year