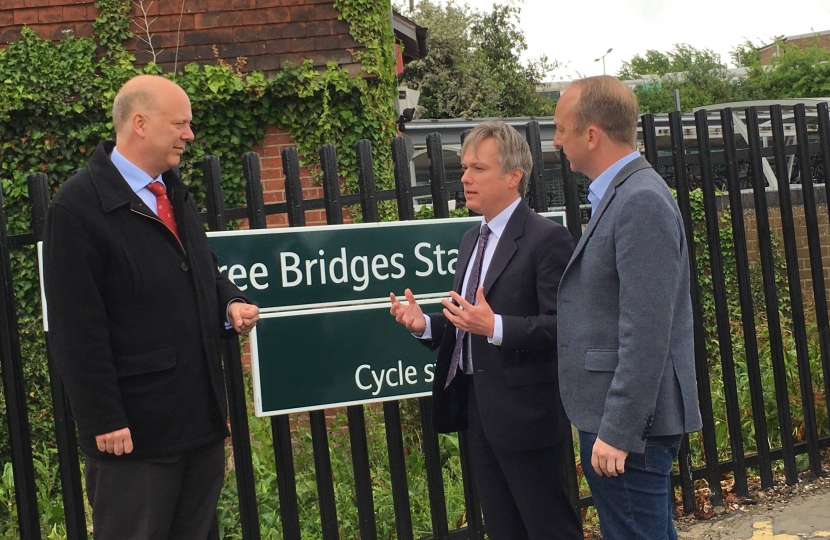 The general election is a choice for our country. It's about whether we choose Theresa May or Jeremy Corbyn to speak for the UK in Brexit negotiations.

I know that there'll be many Crawley Labour voters who supported their party’s local council candidate earlier this month but have security and economic competency concerns over Jeremy Corbyn being British Prime Minister.

Only a vote for the Conservatives will strengthen Theresa May’s position to get the best deal for Britain from Brexit.

The outcome will also decide whether we secure the recovery or damage our economy.

Crawley unemployment has fallen to 1.6 per cent – the latest figures have confirmed a further decrease. In recent years over 600 new enterprises have successfully started up locally and around 56,000 Crawley people now pay a lower income tax. Also since 2010 over 1,000 jobs have been created on average every day across the country, there are 2.9 million more people with the security of bringing home a regular income - we now have record high employment levels.

Only now with a growing economy can we invest in improving public services such as the emergency NHS services that are returning to Crawley Hospital, in stark contrast to Labour closing A&E last decade.

The general election is a choice between either Jeremy Corbyn and Diane Abbott running our country while being propped up by Nicola Sturgeon – politicians who fundamentally don't believe in Great Britain, in a coalition of chaos – or myself and Theresa May’s Conservative team which will continue to secure a strong economy and a global Britain.

Southern Rail: Having consistently spoken up for Southern train passengers I welcome the Conservative Party Manifesto commitments on rail services and ticketing.

The Conservative Government have already confirmed £300 million for engineering upgrades and improvements for Southern and Thameslink on the London to Brighton Mainline. Network Rail will target locations where the most significant delays originate and cause recurring problems for passengers.

Last year I secured a House of Commons debate on local rail services. This was meant to be a cross-party effort, however no Labour MPs chose to take part.

It’s telling that not long after the debate I led, Jeremy Corbyn’s parliamentary candidate for Crawley actually opposed a Crawley Council motion which called on the unions to end their unnecessary strikes affecting commuters.

General Election: Welcoming the Conservative Party platform which also includes more funding for schools and the mandatory introduction of CCTV in slaughterhouses – both issues I have campaigned on in recent years.

Social care: The future of a sustainable adult social care system is a cause I've raised in Parliament. This past January I spoke in the House of Commons on the importance of addressing this issue, indeed health and social care are inextricably interlinked. The UK has an ageing demographic population and I believe the honest approach is to plan for the future now.

Crawley Q&A: Answering questions on a range of issues from the importance of a global Britain, the electoral system, and my pet beagle!

Crawley Observer: A vote for me is to continue my championing Crawley’s interests in Westminster. A vote for anyone else will see Jeremy Corbyn – and his views on the IRA – in 10 Downing Street.

I was grateful for the opportunity to speak with Community Foundation staff about their vision for this project. Where possible, participants can also be supported into work placement opportunities.

It’s right that the Conservative Government are giving mental health parity with physical health. This is an issue I’ve raised in the House of Commons and is a cause I’ll continue to pursue if re-elected to serve our town.

A Conservative Government will invest £11.7 billion a year on mental health.

This month the Prime Minister spoke about the importance of continuing this work. Theresa May has pledged that a Conservative Government will introduce new policies to transform the way we deal with mental health problems as part of our plan to build a fairer society.

BrexitCentral: Our EU exit is the chance for a more outward-looking Britain. The EU is often mistaken for an internationalist organisation when it's in fact remarkably inward-looking. Brexit provides us with a chance for a truly global vision.

Blood Cancer: An issue which has affected my own family and others in Crawley; in the previous parliament it was my honour to chair the cross-party group dedicated to standing up for patients.

My work leading the All-Party Parliamentary Group on Blood Cancer since its founding last June had involved working closely with the charity Bloodwise, and liaising with medical professionals, Government ministers as well as patients and their support networks.

This is a cause I raised with Theresa May at Prime Minister’s Questions in March, and one which I hope will continue to be pursued in the next parliament if I'm fortunate to be re-elected as Crawley’s MP.

I hope you agree that over the last seven years I've been a tireless campaigner for Crawley in Parliament - please support me to continue being the voice of our home town to government.

I’m out campaigning across Crawley but am always on hand to help.

Please email me at henry.smith@crawleyconservatives.org.uk or call 01293 934554 – or stop me while I’m out and about – if you have any questions about my vision for Crawley.