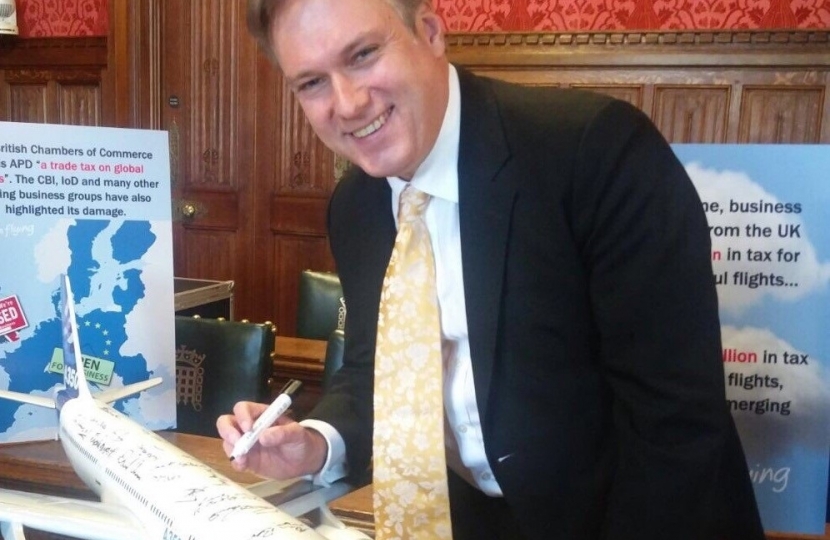 Small businesses are the lifeblood of our economy. These aren’t just words, but a call to action from government following the release of figures showing that SMEs (small and medium-sized enterprises) benefitted from £12.2 billion worth of central government spending in 2015-16.

I’ve written to the Crawley branch of the Federation of Small Businesses to urge their members to consider applying for government work, the online Contracts Finder allows firms to search for information about contracts worth over £10,000: www.gov.uk/contracts-finder

From 2010 to 2015, the number of Crawley businesses increased by more than 600 to over 3,600. However we can’t be complacent – setting up and maintaining a business is not easy.

Modern slavery: Estimates suggest that last year alone, there were over 40 million people across the world living in slavery. The Crime, Safeguarding & Vulnerability Minister, Sarah Newton, told me ahead of Anti-Slavery Day on 18th October that it’s thought that there were between 10,000 and 13,000 potential victims in the UK in 2013.

As the Prime Minister has said, behind these numbers are real people suffering terrible abuse; if we are to meet the ambition of ending forced labour, modern slavery and human trafficking by 2030, we know we have a long way to go.

The Sussex Police & Crime Commissioner, Katy Bourne, is working with Sussex Police to develop a response which will not only support victims, but also hit the gangs who perpetrate such abhorrent crime.

For more information, or to report a case of modern slavery, please visit: www.modernslaveryhelpline.org/report or call the helpline: 0800 0121 700.

A Fair Tax on Flying: With Gatwick Airport in Crawley it’s important to recognise the important economic and jobs contribution made by Britain’s aviation sector, after America we are the world’s largest.

I continue to support the campaign for reducing Air Passenger Duty (APD). It’s not only a tax on trade hurting UK commercial competiveness, but also hits families in the pocket when going on holiday. Whilst I welcomed the Government abolishing the duty for children’s tickets a few years ago, nevertheless, cutting APD would not only help households who work hard all year round, but would be a clear demonstration that Britain is open for business with the world.

More than leaving the EU: The referendum verdict from voters in Crawley and around Britain last year was about more than just leaving the European Union. It was a choice to change how our country works – something I’m well aware of and a point I continue to pursue with the Government.

Among measures I welcome are moves to tackle injustices in use of the Mental Health Act – detention rates are too high and an independent review will consider the needs of users and their families.

There will also be a 25 per cent increase in the supply of qualified nurses graduating into the NHS workforce, to ensure the health service has the staff it needs going forward. A new apprenticeship route into nursing will also be brought in for those who want to earn and learn on the job, rather than qualifying through a traditional university degree.

I also welcome the Government’s announcement that penalties will increase for the worst acts of animal cruelty. Draft legislation will be published in the coming months to increase the maximum sentence for animal cruelty tenfold, from six months to five years.

This is a cause supported by, among other organisations, Battersea Dogs & Cats Home and the RSPCA – I’m grateful for their diligence on this issue and the campaigning by Crawley supporters as well.

Blood Cancer: Following up with the Department of Health regarding improvements accessing psychological support for patients recovering from a stem cell transplant. NHS England are rolling out the Recovery Package; this will ensure patients have more personal care and support from the point they are diagnosed and once treatment ends.

For patients, this means working with their care team to develop a comprehensive plan outlining physical needs and other support they may need, such as help at home or financial advice.

Welcomed confirmation from the Health Minister that by 2020, NHS England wants all cancer patients to have access to the Recovery Package and is committed to implementing this with charities, professionals and patients themselves.

Brexit: The Brexit negotiations are the most important negotiations our country faces. The UK Government want to move these on from discussing withdrawal issues to talks about the substance of the future relationship we want with the EU. It’s wrong for Members of the European Parliament who represent the United Kingdom to vote to block trade talks between London and Brussels.

Rail services: Following up in Parliament regarding delays at local train stations caused by malfunctioning ticket machines. It’s appalling that Southern’s new ticket machines at stations like Three Bridges are all too often not working; causing queues, missed trains and frustration to passengers.

Whilst Govia Thameslink Railway have confirmed to me that engineers have carried out modifications on each machine at Three Bridges Station and additional training for staff has taken place, nevertheless this is an unacceptably poor level of service for the travelling public. I welcome the Rail Minister’s assurances that he will be stepping up the pressure to ensure that these machines are fixed to ensure passengers can buy tickets as swiftly and easily as possible.

Importance of aviation: As the date of our departure from the EU gets ever closer, it’s vital that British business is ready for Brexit and that every possible encouragement is given to reach out to new and existing markets to increase trade.

Wear It Pink: Supporting Breast Cancer Now’s annual fundraiser which has raised more than £30 million over the last 16 years. Breast cancer is the most common cancer in the UK. One in eight women will face it in their lifetime, and every year around 11,500 women and 80 men lose their lives to the disease.

No patient’s recovery should be made more difficult by a lack of care and support, and that’s why I’m backing Anthony Nolan’s campaign, urging health commissioners to review the care arrangements they have in place once transplant patients leave hospital.

I’ve written to the Health Secretary with regard to this campaign and it’s my privilege to chair the Blood Cancer All-Party Parliamentary Group. As we come to the end of its inaugural inquiry into NHS blood cancer care with a report due in the coming months, this is not the end of my campaigning for better treatment for blood cancer patients and their support networks, but simply the start of the Group’s work.

While the health budget continues to increase, from £116.1 billion in 2016-17 to £123.2 billion in 2019-20, and services continue to come back to Crawley Hospital, I am acutely aware there is more to be done to enhance the care provided and support available to those who need it.

Macmillan Cancer Support: Pleased to go to OnSite Support’s Macmillan Coffee Morning, which raised more than £220 for vital cancer research and support. I’m delighted that so many of their staff had taken the time to make and bring in cakes to help raise funds for Macmillan. I hadn’t realised there were so many talented bakers working there!

Events took place around Crawley and throughout the country to increase awareness and raise funds for the charity, whose ambition is to reach and improve the lives of everyone living with cancer.

I recently chaired two parliamentary evidence sessions on the issue of blood cancer care in our NHS. In researching this topic we sought expert opinion from patients, clinicians, researchers and NHS staff to establish what is currently working well in care and where there are gaps in services.

One of the issues raised when gathering evidence was the important support provided by Macmillan. When living with cancer it’s important to remember the impact that this has on a patient, their family and their wider support network.

Fake news: Urging Crawley students to take part in the Political Studies Association’s Schools’ Video Competition, which this year is asking young people to make a video of up to four minutes on the subject of fake news. Shortlisted groups will be invited to Speaker’s House in the Palace of Westminster to discuss the ideas raised in their video with a panel of politicians, journalists and academics.