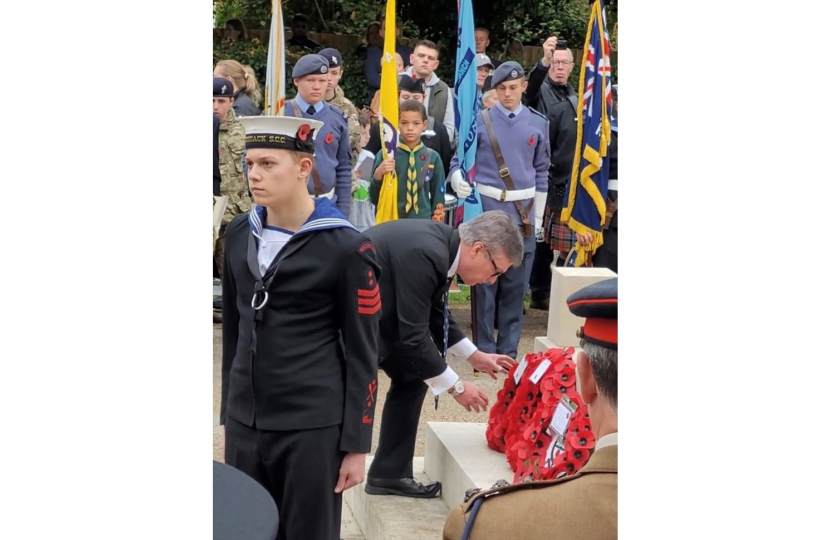 Many acts of remembrance are long-established. On Remembrance Sunday, millions of us either attend a service ourselves or watch the monarch lead the nation and the Commonwealth in respect and reflection.

I was honoured to lay a wreath at St John’s Church Remembrance service by Crawley’s War Memorial, and visit a veterans’ breakfast in West Green.

Last year, the Speaker of the House of Commons opened the first Constituency Garden of Remembrance. This was an important opportunity for Members of Parliament to come together and pay their respects from all corners of the country.

The Garden was opened again ahead of Remembrance Sunday, where I planted a Remembrance stake in honour of those from Crawley who have served our nation.

As we continue our recovery from the effects of Covid-19 and the consequences of Russia’s ongoing invasion of Ukraine, it is right that families throughout the UK continue to be supported through difficult times.

Support from the Government includes the new Energy Price Guarantee which aims to keep bills as low as possible and offers certainty on energy prices.

By keeping household energy bills as low as possible the Guarantee saves the typical household £700 this winter. This is being done by limiting the amount people can be charged per unit of gas or electricity until April 2023, while establishing long-term measures to support families.

In total, Government is delivering a £37 billion package of cost of living support, helping people in our community and our country in the months ahead.

The most vulnerable households in the country will also continue to receive the already-announced £1,200 of support, provided in instalments over the year:

The Warm Home Discount is being extended to March 2026, rising to £150 and reaching an additional 750,000 households.

Cold Weather Payments of £25 a week are being provided to vulnerable households in exceptionally cold weather: almost four million people are eligible for these payments.

It is right that people get to keep more of their own money which is why it is important that National Insurance contributions have been cut, saving more than 27 million people an average of £330 in 2023-24.

A typical worker will keep £135 more of their own money this year: the National Insurance cut is effective from 6th November 2022.

This month my Hunting Trophies (Import Prohibition) Bill passing second reading in the House of Commons. This would ban British hunters from bringing ‘trophies’ of endangered and vulnerable animals into Britain, with this important legislation being supported by the Government.

I look forward to continuing to lead this Bill through Parliament. It is clear to me that there are many in Crawley who want Parliament to pass this into law, and I appreciate all the messages I’ve received from people throughout our community.

In the days leading up to the Bill’s second reading in the House of Commons I wrote about this legislation in the Crawley Observer, Daily Express, Daily Mirror and PoliticsHome.

I have been working with the Department for Environment, Food & Rural Affairs and the Campaign to Ban Trophy Hunting to make this ban a reality. The Bill will deliver a 2019 Government manifesto commitment to ban the import of hunting trophies from endangered animals.

This commitment was also included in the Government’s Action Plan for Animal Welfare in May 2021, following the Department for Environment, Food & Rural Affairs publishing a call for evidence and a consultation in November 2019 on the trade in hunting trophies from endangered species.

Since the 1980s, an estimated 25,000 animals which have been slaughtered have been brought into the UK; many of these are vulnerable or even endangered.

Animals which have suffered as a result of this barbaric ‘sport’ include cheetahs, hippopotamuses, lions and polar bears, which are already under threat from the concerning impact of climate change. The number of lions has fallen dramatically from over 200,000 half a century ago, to less than 20,000 today.

Autumn Statement: With any fiscal event such as an Autumn Statement, decisions have to be made over where taxpayer funding goes. At the dispatch box, the Chancellor of the Exchequer confirmed that support for our NHS and schools will increase by an extra £11 billion over the next two years.

HM Treasury have confirmed that £2-3 billion in additional funding for the NHS is being provided in each of the next two years. This will go to further address issues including tackling the Covid backlog and improving access to GPs: causes I continue to pursue with ministers.

Through £2.8 billion next year and £4.7 billion the year after for adult social care, the number of people leaving hospitals on time and into care by 2024 will double. This will go to address unmet needs and boost low pay in the sector.

The Autumn Statement also confirmed £4 billion in additional funding for schools over the next two years.

The schools budget will receive a boost of £2 billion this year and £2 billion next year to help schools with rising costs as a result of inflation.

With this level of funding, the Government have confirmed it has fulfilled its pledge to restore per pupil funding to record levels.

At the last General Election I stood on a manifesto commitment to maintain the Triple Lock for the State Pension. The Triple Lock was protected in full by the Chancellor in the Autumn Statement.

As we all know, one of the key reasons we are facing cost of living pressures at home is the situation in Ukraine, which has been invaded by Putin’s barbaric regime with little regard for the people of that country, ours, or anywhere else.

The national defence budget will continue to meet our country’s commitment to exceed two per cent of GDP. As we provide the Ukrainian people the support they need to ensure Putin fails, the UK is also galvanising the breadth and depth of British expertise to protect this country, our allies, and freedom itself. Earlier this month in Parliament I was pleased to highlight the importance of UK military backing for Ukraine including from Thales UK, whose base in this country is in Manor Royal.

Help for Heroes: Congratulated Help for Heroes in Parliament on their 15th anniversary. We discussed the importance of further support for the mental health of our veterans, as well as the need for further measures to support the rehabilitation of veterans who may have complex physical and mental injuries. After the event I followed up with the Defence Secretary regarding the important issues which were raised.

Government’s £300 Pensioner Cost of Living Payment: Over 11 million pensioners, including more than 14,000 in Crawley, will receive an extra £300 as part of their annual Winter Fuel Payment this month.

Government’s £324 second Cost of Living Payment: Over eight million people in receipt of benefits, including more than 14,000 families in Crawley, will receive an extra £324 this month.

Over eight million households throughout the United Kingdom who claimed qualifying means-tested benefits during the eligibility period will be automatically paid £324 this month. This direct support is part of the Government’s £37 billion package of cost of living support, including up to £1,200 worth of direct help for vulnerable households.

Small boat crossings: Migrant English Channel crossings not only undermine national security, but they put those undertaking such crossings in danger, and further fuel the evil people smugglers who profit from people’s misery as they trade in human lives, not least costing the British taxpayer unacceptable sums.

This situation is wholly unacceptable and again over this last month I have raised the anger and frustration of constituents over this issue several times. I am grateful for the Home Secretary’s assurance that the Government will introduce legislation to stop the abuse of the generosity of the British people. There’s not a moment to lose.

Ukraine: Questioning the Foreign, Commonwealth & Development Secretary over the use of Iranian drones by Russia to attack Ukraine.

In total, more than 865,000 people in the UK are on the Anthony Nolan register, any of whom could be a match for someone with blood cancer or a blood disorder and be asked to donate their stem cells to give a patient a second chance of life.

Dogs Trust: The Government should take further action to end the cruel practice of puppy smuggling. It is shocking to hear about the horrendous ways puppies are smuggled into the UK and the poor conditions they endure.

I was fascinated to learn more about their work on woodland awareness with the Gatwick Greenspace Partnership, and was delighted to present participants with certificates upon the conclusion of the day’s events.